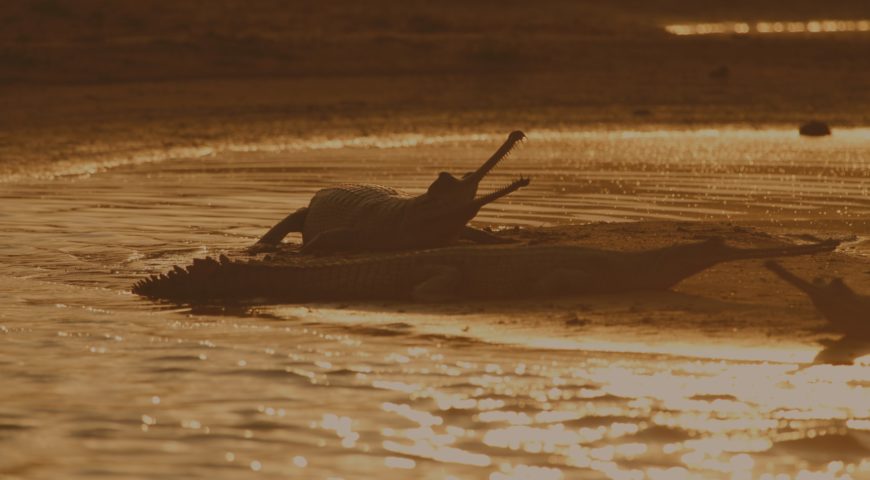 Spot the magnificent ancient reptiles basking in the sun and being lazy on the banks of the river Chambal, as you float away gently, rowed by your professional guide. Crocodiles have inhabited the earth for more than two hundred million years and are often considered as the living dinosaurs.

Chambal is a well known destination for those seeking solace in the rugged natural beauty.With vibrant diversity and a unique ecosystem, Chambal has a lot to tap into.This valley is nestled on the banks of the Chambal river which is a tributary of the River Yamuna, that flows through Madhya Pradesh, Rajasthan, and Uttar Pradesh.Considered to be cursed, the river is still untouched and unpolluted, as it remains one of the cleanest rivers in India.
There are many myths behind the unholy origin of Chambal river.In one such ancient indian text, the river is considered to be cursed because it is believed to have originated from the blood of thousands of cows sacrificed by the Aryan King Rantideva. Did you know the river is also known as "Charmanyavati" which means originating from the blood of thousands of cows. One such text also mentions that Draupati cursed this land on her way to heaven, the reason of which is unknown.
The valley is also home to the National Chambal Sanctuary,which is known to be a habitat to some of the most unusual and endangered species, including 340 species of birds which migrate from different parts of the world during winters.
When in Chambal don't miss the glimpses of fascinating fauna at the sanctuary.Chambal Sanctuary supports one of the largest populations of Gavialis Gangeticus (Gharial)—a rare species of crocodiles which are critically endangered.The sanctuary also boasts of eight rare species of turtles – out of the 26 found in the country. It is also one of the few places to spot the Platanista Gangetica (Gangetic Dolphins), only to be spotted with a sharp eye.

Tours that include this experience-: